SFM – The Next Steps

Did I get it right?

SFM – The Next Steps
Richard Wilson ‏@RichwilBBC 22m22 minutes ago
King, Park et al have spent £8m between them so far.

That £8 million must include share purchases (not going to the Company/Club) and Dave’s jet fuel bill! Nothing is ever straight forward and honest with is crowd.

SFM – The Next Steps
BBCBMcLauchlin ‏@BBCBMcLauchlin 23m23 minutes ago Glasgow, Scotland
Rangers chairman Dave King will NOT be attending this mornings EGM at Ibrox. #bbcsportscot

SFM – The Next Steps
I’m becoming a fan of the poster john james over at https://rangerssupportersloyal.wordpress.com

Here is another of his recent thoughts on the outlook for Rangers finances, manager, squad and King.

It’s important to note that as King launched his Generations pitch, Paul Murray chose to attend the annual convention at NARSA despite not being an invited speaker. His prediction that the new board expect to sell out Ibrox next season, to raise £12/13M in ST sales, is so improbable that it is almost certainly a sales pitch for more co-investors. King also made reference to other investors.

It’s obvious to anyone who cares to look past the Level 5 PR spin that King and his concert party do not have the money to fund their revolution at Ibrox. Barry Leach made a reference to this in an off the record comment during his short time tenure as FD. When Ashley put £10M on the table, they could only raise £6.5M. This quantum will soon run out. They have only £2M more that they can draw down.

King states that they have a short list of 5 candidates for the position of manager. This is yet another lie. Warburton & Weir are the only coaching team that they hope to attract. They cannot afford to pay Aberdeen compensation for their excellent manager. Only unemployed coaches are being considered. Stuart McCall is their default option. If Fulham decide to engage Warburton, then its McCall next season.

King’s statement that we now have a squad of 24 players gives rise to considerable concern. On the assumption that everyone is fit, we have only one keeper, two full backs, one centre half, three midfield players, two strikers and two 20 year old players who both play on the right wing.

I understood that many of the reserve players were out of contract. I could well be mistaken but I’m sure I read a report that 9 of them will be out of contract in July. If this is the case, our squad will consist of only 15 players.

King expects 45,000 of us to buy tickets out of our respect and admiration for him. The fact that we don’t have a manager and not enough players to put a team on the park next season is clearly not relevant.

King is unable to pay his debts. Most of us know how his refusal to pay taxes ended up for him in South Africa. He lost everything, except a house in his wife’s name. Every co-investor in any King company lost his shirt, so why should any one of us chose to co-invest with him.

I await Ashley’s statement with interest. It’s time he sent this penniless spiv back to South Africa. Back to fleecing pensioners with his fellow con man Gregory Morris.
They both should be behind bars. The fact that they are not tells you everything you need to know about South Africa.

Moving On Time?
So an operating loss of just under £16 million (ignore the financing costs as they are largely notional relating to unpaid transfer fees which are discounted because they are interest free).

But as usual, the really interesting bits are on the balance sheet and notes to the accounts.

During the year to 30th June, the "investors" made new loans totalling £23.6 million and £1.8 million being repaid (mainly to Dave King). Another £4.5 million from "investors" has been needed since 30th June.

All of the share issues, including those from July to November 2020, were from conversion of loans – no additional cash flowed into the company's coffers other than the loans detailed above.

In spite of the loan injections, there remained £15.5 million payable for players bought up to 30th June and a further £15.4 million for players acquired since 30th June. Thats over £30 million due for the squad currently playing at Ibrox.

Government schemes for the deferral of VAT payments has seen the amount due for Social security and other taxes increase to £9.7 million, up from £2.9 million in 2019 and needing to be paid in the coming months.

Every year, we remark that the funding required to keep this business afloat looks insurmountable, but each year directors/investors step up to keep things solvent. The Directors are forecasting that they will need only £8.8 million for season 2020/21, but that must be predicated on an extended Euro run and player sales. The club's operating performance and current commitments for player transfer fees suggest a much bigger deficit.

Moving On Time?
Adding some details to Phil’s latest post about outstanding taxes, Note 16 in the accounts reveals Social security and other taxes at 30th June stood at £9,702k, up from £2,906k last year, nearly a £7 million increase.

The accounts state that they have used government schemes to defer payments of VAT and social taxes – no idea if any amounts are overdue, but still have to be paid at some stage.

Moving On Time?
“Campbell Dallas joined the Azets family in 2017.” according to the Azets website.

They should include any up front payments for the pair, plus any other installments due on prior transfers.  Those will be offset to some extent by receipts from any corresponding outgoing transfers.

The accounts only reflect the write down in value of the player transfer fees over the life of the contracts. It won’t highlight the cash flow crunch that the last 2 years of player purchases has brought on.

In the 18/19 accounts for last June, Rangers had £9.6 million payable by 30th June 2020 for player purchases. They only had £0.4 million receivable for players sold. In the notes to the accounts, they disclosed that they had added a further £11.5 million in player purchases (Kent, Helander, Edmundson). We don’t know when that is payable, but on an average contract of 4 years, say another £3 million for the new comers. Than means they needed to find about £12 million in the current year to fund player purchases alone.

I have no idea how much they may already have paid back, but I would expect that payment schedules would be negotiated around season ticket cash, so probably the bulk of that £12 million needs to be found in the next 4 months.

Mr Ashley may want to “ring fence” his potential claim.

As always, in business, cash is King.

Tangled Up In Blue by Stephen O’Donnell (Book Review)
Looks like there was another empty section in the stadium. I'm not familiar with the layout of Ibrox so don't know if these seats would normally be sold for a Europa Cup match.. 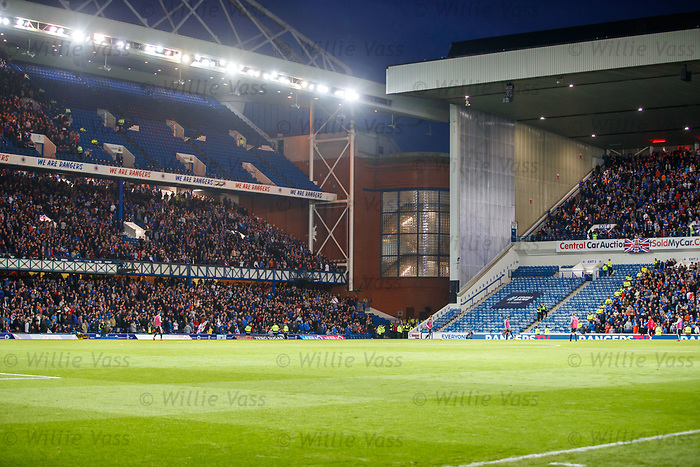 I don't imagine trying to pull a swifty over empty seat numbers would go down well with UEFA.